What is an Otoscope | History and Use

The Otoscope was first described back in the mid 1300’s by  Guy De Chauliac in France. It was used for examining the nasal and aural passages. The design changed in 1838 when Ignaz Gruber invented a funnel shaped speculum, though his findings were never published. An otoscope using air pressure was invented in 1864 in Germany by E. Seigle and was called an pneumatic otoscope. Otoscopy is the term used when doctors to look into our ears using the modern day otoscope. It is used for routine screening or to check for illness when a patient complains of ear pain. A disposable conical speculum is placed on the end of the otoscope. The ear is pulled to align the ear canal and the speculum is inserted into the ear. It can then be manipulated to see many angles of the inner ear. They are also frequently used for examining noses so there is no need for a separate device. With the speculum removed, it can also be used for examining the upper throat. 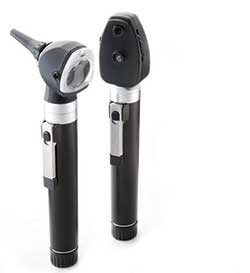 An otoscope consists of a head and a handle. It has a lower powered magnifier and a light. The disposable speculum fits on the end. When examining the patients ear, the physician first must stabilize the otoscope to prevent it from traveling too far into the ear and damaging the ear drum. Pneumatic otoscopes push the speculum into the ear to test the ear drum. Some models are wall mounted with flexible cords, while others are portable and battery operated and usually come with a base so they can be easily recharged. They now also come in several colors and can be found sold in sets with ophthalmoscopes.

Ophthalmoscopes assist medical professionals by helping them see inside the fundus of the eye. It may be done as part of a routine medical examination, but is routinely done as part of an eye examination. The health of retina and vitreous humor are determined during these examinations. It can be used to detect retinal detachment or eye diseases such as glaucoma. When patients complain of headaches an ophthalmoscopic exam may find swollen optic discs. This could be a sign of and increased intracranial pressure which could indicate conditions such as a brain tumor or intracranial hypertension. In diabetic patients, ophthalmoscopic exams should be obtained every 6-12 months. Physicians are looking for diabetic retinopathy which can lead to vision loss if not treated promptly.

Sometimes when visiting an eye doctor, the pupils are dilated. Mydrdriatic drops are placed in the eyes, which dilate the pupils and allow the doctor to easily visualize the back of the eye, which without the drops may constrict. New technology is changing this practice. Scanning Laser ophthalmoscopy is allowing for better exams without the discomfort of the dilation process.

No one is certain who invented the ophthalmoscope, but some credit can be given to Charles Babbage in 1847. Hermann von Helmholtz was instrumental in the ophthalmoscope being recognized as a useful tool in 1851.